Blueberries ready to be picked by hand at Kent Kreek Berries

With blueberry season upon us, our produce manager Frank and Board member Graham went down to Norfolk County to visit Kent Kreek Berries in Simcoe, Ontario – about one hour south of Hamilton near Lake Erie. Paula and Jeff Zelem are second generation farmers, the family farm was started back in 1965. They have been growing highbush blueberries for over 35 years and are some of Ontario’s blueberry pioneers.

From Ontario Berry Growers: The blueberry bush (Vaccinium) is a Native North American Species. Early settlers used the fruit in their diet by incorporating it into a variety of foods and medicine. North America is the largest producer of blueberries and accounts for about 90% of the world’s crops. High bush blueberries are grown in more then 30 states and in provinces like Ontario and BC. The cultivated blue berry to high bush was the result of early efforts in the 1900’s by Elizabeth White and Dr. Frederick Coville. Over the years, plant breeders have worked to enhance the desired attributes of blueberries such as texture, taste, disease resistance and colour. 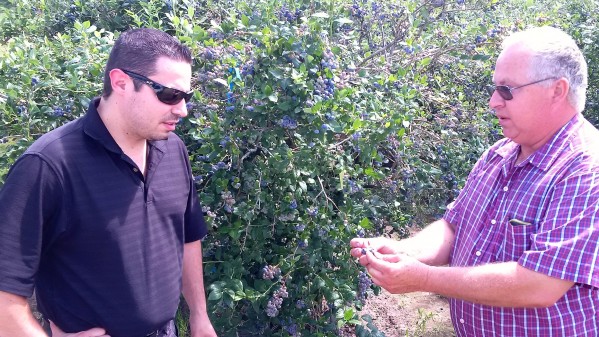 The first stop was the berry patch where we saw some of Jeff & Paula’s oldest bushes – more like trees – loaded down with an abundant crop. These bushes will be picked 4-5 times through the season. Most of the berries are hand-picked, but they do have a harvester for the younger bushes. Jeff explained that blueberries are relatively low maintenance, but blueberry growers face two particular challenges: 1) Birds love blueberries, particularly robins, & farmers use all kinds of methods to convince birds not to peck their berries. Jeff has everything from sound cannons to flashing lights and sparkly tinsel. They are also part of a trial project to attract kestrels (bird of pray) to the fields. 2) Spotted-wing drosophila (SWD) is a new problem hitting blueberry and soft fruit growers across Ontario. SWD is an invasive fruit fly species that attacks ripe fruit and has decimated many farmers’ crops this season. So far, Kent Kreek has been able to keep it under control using minimal amounts of insecticide and good fruit yard management practices. 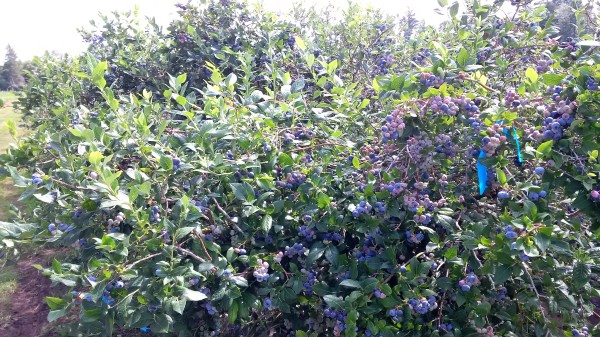 The next stop was inside, where they have an innovative grading line for which they received a Premier’s Award for Agri-Food Innovation in 2010. The line uses ultravoilet light to assess the quality of each berry that rolls past it, and uses air pressure to eject any soft or damaged berries from the line.

The berries then go on a sorting table where staff remove any berries that were not caught by the grader before they are automatically packaged, ready for delivery to the The Mustard Seed Co-op and other Ontario retailers.

Jeff explained that they really value when local consumers choose Ontario fruit, as often the big chains prioritize convenience of supply chain over supporting local producers. This often means blueberries are imported to Ontario from the US or Western Canada during Ontario’s season. The Mustard Seed is working hard to connect directly with producers like Jeff & Paula to help keep Ontario’s growing regions thriving. Try their berries the next time you are in the store. As Wendell Berry says, “Without a prosperous local economy, the people have no power and the land no voice.”

Blueberries at a national retailer near the Co-op this weekend are labelled “Product of Canada” but are supplied by a Seattle-based company meaning most of the value of these berries goes far from our community and local economy.

RE-INVEST IN OUR CO+OP